Traveling across India without money seems impossible but these guys did it! by Mehak Jain | TripGully

Traveling across India without money seems impossible but these guys did it!

Sometimes the only thing that holds us from traveling to new places is the MONEY. But two guys Anuj Khurana, 25, of Allahabad and Ishant Kumar Jadaun, 22, of Moradabad decided to travel across India without any money and this change made them experience this country in a true way. And they called themselves MOVE.

Gurgaon to Jaipur and back

Before starting on their crazy adventure they did a trial run on a four day long trip from Gurgaon to Jaipur and back to test each other for the adventure ahead with their friend Akash Sharma. Here is what they posted on their Facebook page Move.

"All three of us clad in our sleepwear, carrying only 100 bucks in our pockets, went on a hitchhiking trip from Gurgaon to Jaipur and back. We hopped on/into 18 vehicles ranging from bikes, trucks, passenger cars, a goods carrier, an auto-rickshaw, a Mercedes traveller and a VOLVO bus; waited for nearly 10 hours before vehicles gave us free rides; survived on the food requested from Domino's (which was obliged with a medium-sized pizza), asked from bakery shops and sponsored by a truck driver; slept on spare truck tyres, benches, dividers and the servant area of a wedding lodge; and warmed ourselves up for our 500 day hitchhiking trip across the country to do what we love doing the most-Hitting the Road! MOVE!"

Beginning point of their adventurous journey was Mumbai - The City of Dreams.

Got bikes arranged by a friend they met in Ladakh and traveled to Lavasa for a cup of Tea.

Pune to Aurangabad: Hopped in everything they could manage from a car, a truck, a tractor and a van, and took a nap next to a garbage dump while waiting for the vehicles to become a part of their journey.

Now it was time for Goa. They say this is the time they can never forget. They did camping on the beach and met new people who share the same passion for travel.

They travelled around Goa flea markets, remote places and also lived in ashram.

Next destination was Bangalore from Hubli. And Banglore was the place that made them famous.

Posting their journey on Facebook made MOVE famous and they started to get invitations for meals and stays. They got around 300 invitation within their 25 days stay in Bangalore. MOVE got famous when they got published in The Deccan Chronicles. MOVE also invited to conduct a seminar in Bangalore International School.

Before leaving Bangalore MOVE gave special thanks to all the people they met while in Bangalore.

Move on the longest spin of their hike. Belgaum to Pune, NH-4, Karnataka- Maharashtra.

As they say their most comfortable ride Tumkur to Hubli, Karnataka. We can see why ;)

MOVE on their best truck ride. After all they tasted desi daru with the truck driver. Mumbai to Vapi (Maharashtra - Gujarat)

Move getting free lunch at the dining room of Expressway Toll Authority, Ahmedabad.

Enjoying nightlife in Ahmedabad and having jalebi at 2:00 am in Manek-Chowk.

Journey from Himmatnagar to Udaipur

Got some bananas and free ride on a bus in sleeper class from Himmatnagar to Udaipur, for doing a haircut.

After resting for some time in Aligarh at home. They went to Nainital to put their adventure for a hold and promised everyone for something bigger and better that takes this to the next level.

Here is what they say about their plans about this trip.

"Simply put, my plan was to travel across the length and breadth of this nation without money or, the constraints that it brings. I hitchhiked, borrowed, or did whatever it took to get me through another day. In the process, I aspired to spread smiles and share laughter."

10 Travel movies to watch at time of lockdown 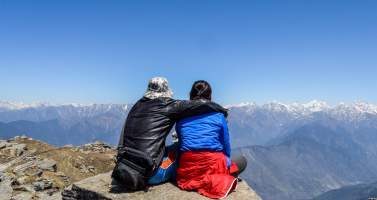 Kedarkantha Trek - Going back to mountains with my Buddy